According to W3School, as on 2010, 86,3% of PC users all over the world run Windows OS compared with the humble 4,8% of Linux. However, this number keeps dropping, while the Linux market is growing rapidly. I believe this is the new trend of PC users. To illustrate the point, I will go through the 3 fundamental questions: What, Why and How.
At the end of the day, you don’t need to remember anything but the interesting quotes highlighted in red color. And I hope you’ll enjoy the article & give Linux (Ubuntu for example) a try!

To KISS it, Linux refers to the family of Unix-like Operating System (OS) using the Linux Kernel, which was conceived and created by Linus Torvalds. Linux is a leading server OS. Its popular consumer distributions include Ubuntu and openSUSE.

Let’s first take a look at 4 ultimate advantages of Linux over Windows:

Life is too short to waste time worrying about viruses. If you ever use Windows, virus is basically nothing but an infuriating computing nuisance. Luckily, viruses now would be things of the past or only in the Microsoft world with the emergence of Linux. Be fearless of getting viruses from your friends’ thumb drives. Be free from getting expensive Anti Virus software. Using Linux is really a virus-free experience that Microsoft Windows can only dream of.*

“Avoid the Gates of Hell (Viruses and DLL). Use Linux!”

Linux scores a lot when it comes to stability. You will almost never be greeted by ‘Blue screen of Death’ as quite often as in Windows. What’s more, you would hardly be asked to restart your computer when you finish installing an application. Even more, you will never need to find and install any device drivers since Linux only support open source drivers, which is always available on-line (and the system will do the jobs for you). As a result, you will almost eliminate the downtime caused by the OS.


“Windows had detected you do not have a keyboard. Press “F9″ to continue.”

As a former Windows user, I used to have it re-installed at most every 3 months since its performance gets below average. It’s really irritating since I have to re-install a whole bunch of software and drivers as well! Incredibly, Linux hardly ever slow down over time. You would probably hear someone who’s had the system running for years without any slowdown! Even continuous operations seem not cause any problems to the system. Everything seems to work as quickly and perfect as it did yesterday.

“Windows is extremely fast after a fresh install. If you want to make it stay that way: – don’t use it!”

Hey folks, Windows is not free! Its latest version costs $199.99! It just seems to be mainly because Windows is a “built-in” when you buy any new laptops or desktops. But you know what, your laptop or desktop price is definitely inclusive of the licensed Windows cost! Obviously, it’s not a small portion.

Lamentably, it’s just a start of endless troubles. Windows is just a great framework for software companies to take advantages. You can’t just install Windows alone! You also need Anti-Virus software and Microsoft Office suite at the very least. And you get my point: You have no choice but to pay more and more …

Yes, there is no such thing as a free lunch. Fortunately in life, there is one and perhaps only one service that’s free – it’s the open source software. Linux OS is completely free, meaning you don’t need to pay a single buck to use Linux OS. You will even be able to upgrade to the latest version when it comes out, together with free updates and patches in between.

Contrary to Windows, Linux always strives to give you as much value as possible for the minimum cost.

Hold on. There are even more… “Microsoft sells you Windows; Linux gives you the whole house.”

Linux come in many flavors – distributions also known as distros, which use the same kernel (the guts of the Operating System) such as Ubuntu, Kubuntu, Fedora as opposed to Windows with only 2 main lines (Win9x and NT class with Win9x is now no longer supported). They interestingly differ in the built-in software, GUIs, install processes, prices, documentation and technical support.

Linux is customizable in a way that Windows can never be. A large number of available desktop environments, of which GNOME and KDE are widely used, are always distinct in the ways they manage items. If you get bored with the look of any distro, you can change its themes; bored with its desktop environment, you can switch to another distro. Also, there are some other specific purpose versions of Linux available here and there. If you wanna start with Linux, let use Ubuntu – the most user-friendly Linux.

Linux source code is also freely available. If you want (and are able to), you can tweak it and create you own customized OS!!

“Use the best: Linux for servers, Mac for graphics, Windows for Solitaire” 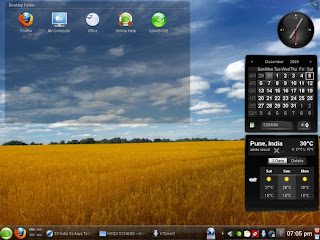 Nowadays Linux with its various distros is simply stylish, gorgeous and wonderful. Its snazzy desktop effects,which is really a pipe dream in Windows or even Mac OS X, will definitely give you tremendous experience. In Ubuntu, with the help of the guy called “Compiz”, you’ve got even more awesome options.

It took nearly 6 years from Windows XP to Vista and another 3 years to Windows 7 with a few service packs updated meanwhile. In Linux, you have the equivalent of a service pack of most distros every 6 months. In the meantime, you will get bug and security fixes every week. Regular releases not only increase Linux stability but also perfect its look and feel.

“In the world without walls and fences, who need Windows and Gates?”

Truth be told, Windows 7 doesn’t boot or shut down faster than its sibling – Windows Vista and of course is far outperformed by Linux distros. If you turn on your desktop or laptop twice a day, you will likely have 10 extra minutes each week and much more since Windows slows down significantly over time.

Linux will give you some extra precious time beside your family, boy/girlfriend. Think about it if you’re as busy as a bee! (the naked)

If you have a modest system or wanna utilize your old PC, use Linux! Linux distros generally demand lower system requirement than Windows. In particular, with just 256MB of memory, you can run OpenSuSe 11.3 or Ubuntu 10.04 (LucidLynx) adequately compared with 1GB of Windows 7.

Likewise  most of Linux distros occupy just a little bit space of your hard disk. They takes at most a quarter of the disk space that Vista or Windows 7 does. It means you will have more disk space for your own files.

If in Mac OS, you only need to acquire (download), un-package then drag and drop to install a programme, in Linux, it’s even easier. In Ubuntu for example, the Synaptic Package Manager offers you a great and beautiful “Free App Store” wherein with just a simple search and click, you already install an application successfully. The job of hunting the Internet for an “exe” file then process lots of pop-up windows seems now very complicated and time consuming.

The beauty and power of Linux, as an Unix-like system, must be the command line. Within a terminal, you can recover the system if the graphics subsystem fails, script many applications and of course install new ones as well. It’s all done in just a (few) command line(s)! Windows also has got a command line (cmd), which is just by far inferior.

“What’s this script do?

Hint for the answer: not everything is computer-oriented. Sometimes you’re in a sleeping bag, camping out with your girlfriend.”

Linux is operated in command line!?

It’s hard to find my hardware drivers in Linux!?


Linux is an operating system!?

How to install Linux? 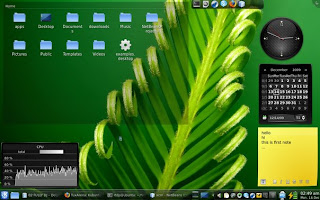 Kubuntu with KDE 4.3 copied from rtdptech.com

Let’s start with Ubuntu – the most Linux user-friendly distro. The installation is pretty simple. First, you go here, download the latest version, burn it into a CD or create a USB drive. Then you can either give it a try or install it. With just 7 simple information acquisition steps and 15 minutes waiting, Ubuntu is ready for you to explore!

Don’t wait. Try it now! It’s worth every second you spend!

* This is a general article for any persons including IT novices. So I won’t discuss technical terms in details. Some necessary illustrations and/or clarifications will be examined here.